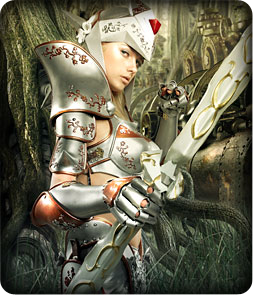 The Elves are an important asset to any party and guild. Although they may lack power in damage, with their array of buffs that could increase offense and defense, Elves are vital characters in aiding players level, and also play a major role in the Player vs. Player aspect of the game.

Long time ago in the continent of MUonline. The elves of Noria claim to be the first race on MU before Human and Goblin. It was foretold that a Norian elf had an unearthly beauty and grace. While they may shy away from hand to hand combat, one cannot say that they are weak. The elves were the ones who had taught man the art of the bow. Nobody can beat an elf in an archery contest. The elves of Noria have also made pacts with other races and they call upon such pacts to aid them in battle.

Elves specialize in long-ranged combat and defensive magic. Because they lack the fortitude to strive longer in battle they build themselves into two ways. A damage dealing elf that could deal heavy damages out of harm's way and with their edge in being long-ranged in battle they have great defense due to their ability to evade attacks. As elves focus their energy they are able to use it for summoning and defensive spells: "Heal", "Greater Defense" "Greater Damage" and "Recovery" which makes them invaluable to a party. This causes heavy dealing players to deal more damage and receive less damage from opposing parties.

The Fairy Elf starts it's journey in Noria. The Fairy Elves specializes on long ranged attacks that could deal great damage out of harm's way. They also aid in combat with their buffs that it's very valuable to a party. The Fairy Elf can evolve in a higher class called Muse Elf, upon reaching 150 of level, by attenting Priestess Sevina's Second Class Quest.

They're able to aid their party very well in combat with their array of support skills. To be able to change to High Elf, you will need to complete the Third Quest from Priest Devin.